“If I had to sum up history in one sentence it would be: Life gets better—not for everyone all the time, but for most people most of the time.” – Bill Gates

It’s easy to look at the news on a daily basis and think the world is getting worse, but that couldn’t be further from the truth. Unfortunately, the news only reports on what gets the most viewership, and reporting “US murder rates down 1.6% this year” or “worldwide childhood mortality fell this year like it always does” aren’t nearly as visceral and impactful as the KKK, drug overdoses, Middle Eastern wars, or even our president’s tweets.

Not that the world is perfect—far from it—but I think it’s important to be reminded once in a while how good we have it compared to everyone else in human history. Similar to my blog post, Is the world getting better or worse?, reading through the annual letters of the Bill and Melinda Gates Foundation was a healthy reminder of the amazing progress this world continues to make, despite the non-stop negative headlines.

It sounds counter-intuitive, but as childhood mortality decreases, a country’s population growth decreases as well. Generally, parents in poor countries have more children than parents in rich countries. When childhood mortality is high, the only way for parents to guarantee they have children that can survive into adulthood and support them is to have more children. Having a large family is seen as an insurance policy to losing children early. Thus, as childhood mortality decreases, parents have fewer children and population growth slows. The result of slowing population growth is a government that has more resources per person (including healthcare, education, food, and jobs). Likewise, parents will have more resources per child. The parents will be able to feed their children more, get them better healthcare, and keep them in school longer.

When children are fed more, kept healthy, and are better nourished, their brains develop better, which also increases their ability to stay in school. Children who stay in school eventually become more productive adults. In one study of thirty developing countries, women with no schooling had three more children on average than those who attended high school.

“Almost every country that has become wealthy started with a huge increase in farming productivity.”

An important aspect of food, health, and nutrition is farming. Most people living in extreme poverty still feed their families from their own farm. And these personal farms are extremely inefficient compared to those in the US. Better farming techniques means families can save food and money and are thus more likely to survive a bad crop. When farming productivity is improved, nutrition is improved, and hunger and poverty are reduced. As nutrition is improved, more children survive to adulthood, meaning parents need to have fewer children.

More efficient farming also means the children can stay in school longer because their help is no longer needed on the farm. Better nutrition and staying in school longer helps their brains develop more. And the more kids who stay in school and graduate high school, the more knowledge there is in the communities to improve farming yields even more. Like we saw in the US, better farming techniques eventually means the country needs fewer farmers, which results in more people dedicating themselves to all sorts of entrepreneurial ventures.

“The virtuous cycle that starts with basic health and empowerment ends not only with a better life for women and their families, but with significant economic growth at the country level.”

Economists call this the demographic dividend. When childhood mortality starts to quickly decrease, one generation ends up being quite a bit bigger than the younger generation because families have fewer children. This results in a lot of people in the work force and these workers have relatively few dependents. Thus, parents (and the government) are able to invest more into each child’s education and healthcare. Historically, this combination of a large workforce and fewer children has resulted in rapid economic growth over a multi-decade period. The demographic dividend is essentially the result of all these flywheel effects coming together over many years.

“Virtually all advances in society—nutrition, education, access to contraceptives, gender equity, economic growth—show up as gains in the childhood mortality chart, and every gain in this chart shows up in gains for society.”

A summary of the annual letters

Bill and Melinda do a great job of thoroughly explaining their foundation’s work in each letter, but they also support their points with many charts and graphs. In many ways, the below charts tell the story much quicker than I could. 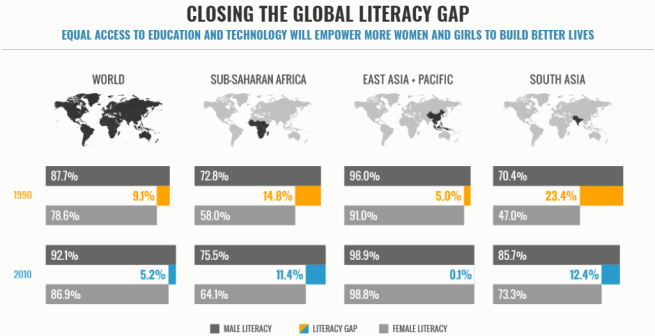 “By almost any measure, the world is better than it has ever been.” – Bill Gates

3 thoughts on “Lessons from Bill and Melinda Gates”

This blog is for informational purposes only. Everything on this blog is the opinion of Travis Wiedower and should not be taken as investment advice. Clients of Wiedower Capital may maintain positions in securities discussed on this blog.